Shandy; giving him a second chance

This is not another dog fallen foul of the law lumbering his or her owner with a Denuncia. Shandy is a year old German shepherd crossbreed handed into APASA Javea dog shelter just over three months ago. From what they know about his history is that his first owner abused him as a puppy then the second owners found they could not handle him.

What ever happened to Shandy he received a run of his own complete with a bed and a large travelling type kennel. From first entering the run, he went into the kennel and never came out again except to eat and go to the toilet.

The hope was he would eventually settle down and he would naturally become more sociable. Not Shandy, he went into the kennel and any one who went near could only hear lots of fearful growling.

They gave him plenty of time to settle in but no one could get near him to take him for a walk so his self-inflicted exile in his kennel became almost permanent. After three months and no improvement, APASA asked if I would have a look at him. This is indeed odd behaviour as dogs are normally very sociable so what had gone wrong was the logical question.

I have seen dogs where the owner have beaten a dog to the point it will stay in its kennel and will readily attack any human or certain types of human that came near them. Even then, it is still possible to turn them round given lots of love and attention but not in this case.

When I went to see him, all I could hear was lots of growling. I went inside but sure enough there was no way he was coming out for anything even a titbit or a calming tone of voice from me.

I went to Andrea Rapolthy and suggested Shandy had to come out of his kennel and only have the bed in the run so he could see people. The run was shaded so the kennel was unnecessary and this was the problem as he had somewhere to hide. 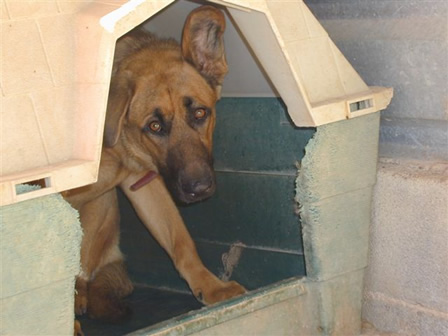 I went back in and tipped up the kennel evicting him from his sanctuary. After a while, he did come and sit near me in a timid fashion but when I put my hand down, he gave me a warning bite. Luckily I was wearing Kevlar gloves that though do not stop the crush of a bite they do stop any penetration. I do not look at this bite as a problem because here was yet another human that has just evicted from his safety.

I stayed a while then went to borrow the pole so I could snare him and take him for a walk. Their pole was very large but I did however walk him round the shelter and sprayed him with Front Line to get rid of three months of ticks and fleas. I also noticed that he seemed to like the Pedencos in one of the runs so instead of going back to his own run he had another larger one complete with a young Pedenco bitch called Penelope.

I returned some days later with Winston so we could go for a nice long walk. I had made up a smaller pole using half inch tubing so it looked more like a stiff lead. With this, we went for our walk in the heat of the day. I like this because it tires dogs quickly so they do not wish to do much let alone have arguments with dogs or people.

He was very good but a bit of a puller. This eased off after a while and I found he liked Winston but had no knowledge of how to play. Eventually after two hours with lots of titbits that he took gently from my hand there appeared slight memories of how to play with Winston, so this was an improvement.

We returned to the shelter and I asked if he could have a different run because this one still had a much larger concrete kennel that would become his sanctuary again but they said they did not have a run for two dogs without a kennel.

I returned a week later expecting little improvement and asked for the small pole that I made for APASA. I had only just found it when Andrea that works at the shelter came chasing after me telling me that the pole was unnecessary. She said she had been sitting with him for hours coaxing him out of his kennel by fussing Penelope. Andrea went to the office, got two leads, and went into the run where both dogs came to her to allow her to clip on the leads. This was indeed a major improvement.

I took Shandy and Penelope for a walk into the orange groves where I sat down and shared out the titbits. Shandy was much better so sitting by my side and I could touch him all over without any sign of fear. I returned them to the Shelter and suggested I would come back in a few days and take them to my house. Shandy needed walks along the Arenal and in Javea town to get him socialised.

A few days later, I went to collect them but I was expecting Shandy would not get in the car and hoped that Penelope would get in so he would follow her. How wrong I was as he jumped straight in. Penelope was the one that needed all the coaxing to get her to get into my car so I think she had never seen one before.

He was obviously use to cars and when parked he sat on my seat but he recognised my arm direction telling to get into the back, obeying straight away.

Back at home, they met Winston who then gave them a guided tour of the garden. I did not make any beds for them and they could sleep anywhere they liked inside or outside but no way were they coming into my bedroom.

The first afternoon I went into my bedroom followed by both Penelope and Shandy. I turned and said loudly OUT, OUT, OUT until they were both past the door threshold. It took two minuets for Penelope to understand and twenty minuets for Shandy to get the message.

I practiced this in the afternoon, as I would not want to do this when I was actually tired when training would not be something I would be looking forward to late at night. Shandy came in a couple of times and needed reminding and though now he follows me around the house when he is not playing with Winston and Penelope my bedroom is out of bounds without having to close the door.

If you do shut the door, a dog only sees this as an obstruction to overcome. No matter how many times you go to the dog and tell them to stop their scratching at the door or barking to tell you they are there this will not happen if you leave the door open. Wolves do not use doors.

One thing I did notice was that both dogs toilet was very soft so I thought this would be a good time to test how effective the recipe of English Chappie Chicken and Rice with an egg and some milk was for doggies upset tummies. I can tell you it only took three days and they were both the same as Winston.

Next week Shandy starts his Sociability training and how to stop his increasing separation anxiety.