Rio is only eleven months and so he is still very much a puppy. If you watch him chasing grasshoppers or butterflies with his long gangly legs and puppy coordination, he is a joy to watch. He is also a very submissive dog yet he is not timid. Today walking in the port of Moraira he suddenly jumped in shock when he heard the overhead windsock flap above him. At first, he ran off, only to bravely return moments later to bark at it until it stopped making a noise; then he trotted off seemingly proud of himself.

Almost all the people who met us asked what sort of dog he is and remarked how beautiful he looks. I think the tuffty ears do play a big part in his appeal as well as the way he trots. Basil Brush seems to come to many peoples mind and looking at him you can almost hear him saying Boom Boom. He is a very touchy feely dog, often wanting to be next to you and loves it when you brush him. Be warned this breed needs constant grooming, as sticky burrs seem magnetically attracted to his coat. Yet still if they cloned him, I would certainly have a copy Rio. 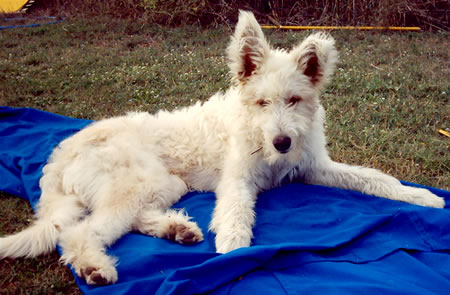 Whilst I sat outside at a local bar, Rio simply lay at my feet and slept in the sunlight. He is one of those dogs people have to come up and fuss. He does not look and is certainly not aggressive yet there is this possession problem with his food.

I have tested Rio with a full temperament test and he has no other types of aggression. This must mean that the normal doggy warning language used against other dogs, Rio is using against his owners. This needs immediate retraining.

There are in fact many ways to retrain him but which we use depends on Rios character as well as whether this problem is genetic or learned. Next, I must look at the owners and see how they interact with their dog and what method of retraining they would willingly accept. Some people would agree to high levels of enforcement retraining, whilst others would prefer a more gentle approach.

Fortunately, Rio has been stopping with me for over two months so I have been able to let him settle in. This has given me a chance to observe him and his interaction with both Winston and me along with any dogs that are briefly staying with me.

First, we must look at Rios breeding. The Pastor Vasco breeds dates back many thousands of years. Looking at the various websites there seems to be many variations and many with soft ears, unlike Rio. This breed is a herding dog and I suspect they herd from a distance like Border Collies. This is different compared to terriers and Corgis that often work close to cattle, even nipping their heels if they do not move. I understand that in Buckingham Palace many of the employees are well acquainted with this painful herding method. This also accounts for why many small dogs like to nip the heels of people leaving their owners home.

Observing Rio when he is lying at my feet in my lounge, a German shepherd called Boisie will not dare enter the room. If he does when I open my arms for him to come to me, Rio will change from lying down to lying upright and then starts the lip curling. When I then have to call Boisie, Rio stands in the stalking mode trying to keep him out yet as soon as I touch his bottom with my finger saying Rio No he immediately lays on his back in full submission and Boisie can then come in.

Rio has far more pronounced facial expressions than you see in most dogs. Certainly if Winston curls his lips and growls if a puppy goes towards him when he is eating, it is still nothing as obvious as Rio. So why is Rio showing more pronounced body and facial language than other dogs and where does it come from?

Only the other week we learn that there is now proof that we inherit facial expressions and mannerisms instead of copying them. I know I have characteristics of my father but I assumed I merely copied him. Well we know now why, because scientists have tested people who were blind from birth and yet they still have some of their parents facial expressions and mannerisms.

I think this is the same for Rio. He has inherited the more defined facial expressions from his working stock ancestors. I assume this makes him more useful as the animals he would be herding would be more aware of his presence and more willing to move because they recognise his more visible aggression.

I have never herded animals with dogs so I am not knowledgeable about this subject but having learnt horse and dog whispering, I am well aware I can move a horse or dog faster or slower by the amount of visible aggression I appear to be showing.

Because Rio is a herding dog, this could be why he looks so fearsome like Alien when you try to take his meal away from him.

As Rios facial expression looks so scary, I feel certain the owners immediately backed off, allowing Rio to think that he has succeeded in not only being able to chase away dogs from his meal, as most other dogs do, but also humans. 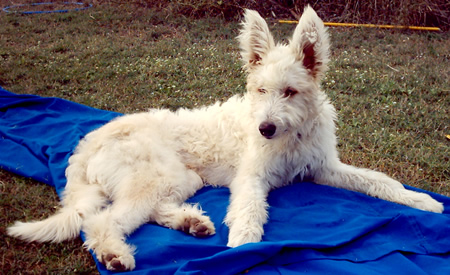 With the owners discovering Rio was a problem, the methods they used to try to retrain him I think have been more of a challenge so making the problem worse. This is why I used the comparison of Toco, played by Eli Wallach, in the film The Good, the Bad, and the Ugly where he said, If you have to shoot, shoot, dont talk. In other words, simply do it and do not talk or hesitate as this is only challenging your dog.

In the last few weeks, I made two tests on Rio on different days. The first test I walk up to Rio as he was eating whilst I am wearing a protective glove. Without saying anything, I picked up his bowl and moved it forward a metre and he just followed it and then when I placed it on the ground again he continued to eat. There was no lip curling as the bowl has already gone; so there is nothing to protect. With this method, there is no challenge.

The next day, again wearing the protective glove, I walked up to Rio and told him he was a good boy. I patted him on the head and he immediately stiffened his body with his head still in the bowl. I patted him again then put my hand down to hold the bowl. I then got his dramatic lip curling, but this week there was no longer any growling and certainly no attempt to bite me. I then again moved the bowl forward a metre and as soon as it moves, the lip curling stops as the bowl has gone. He simply follows the bowl and when I set it down, he once again begins to eat normally. This method is a challenge to a dog.

All Rio has to learn is that humans are not like dogs. Humans do not wish to deprive dogs of their food and it is best to teach them this from when they are only eight weeks old upwards.

Many owners feel it is more correct to let a dog eat its meal without any interference. Owners must make this test to check if there is a problem. If there is, then they must learn how best to correct it as it is our responsibility to make sure our dogs do not learn to bite people. If the puppy is ok, then owners need only use this test occasionally until they are certain their dog does not bite.

This test serves two major concerns. The first is that the dog sees the owners as leaders and they control its food. The second is for the protection of anyone who for any reason reaches down towards a dogs mouth for anything, like picking up a ball or stick, only to find the dog bites them to protect its possession.

Next week will be the big test: how to retrain Rio to give up a juicy bone.