Possessive Aggression of Rio, the Cures

Rio goes home tomorrow and I will certainly miss him. He is very affectionate and the websites say that this breed is very loyal to its owner. I do not know though if Rios character is standard for a Pastor Vasco or if he is just a one off. My usual rule of thumb guide is working dog breeds born from working stock are not often good as a companion dog. Take Border Collies for instance as they are on the go all of the time and they enjoy working. Rios work experience seems to be digging large craters in my garden and lying in them. One is so big both Rio and Winston sleep in it together.

The owners will be coming tomorrow to spend three hours here to go through ways of controlling their anxiety and how to teach Rio there is a difference between how humans act as apposed to dogs. They will also join in one of the obedience class sessions so I can see how they interact with Rio in a human/doggy environment. Rio works well with me in a class as well as outside when I take him for a walk in Javea. Many people think he is an Irish wolfhound, but no one has ever heard of Rios breed at all.

One method I have used to reduce Rios possessiveness is to teach him retrieve. Whilst he will not let any other dog take away the Frisbee, he will give it to me because he enjoys it thrown for him. When ever we wish to stop a dog doing something wrong we must remember they are doing it because they receive some reward or pleasure. To stop this means we have to find something that is a better alternative. For instance if your dog retrieves something but will not give it to you, this is because it either enjoys the pull game or it is again possessiveness.

Years ago, I tried all sorts of things, like a ball on a rope so on the command LEAVE; I would pull the ball sideways out of my dogs mouth. John Rogerson seeing my problem suggested I just offer my dog a treat and this worked perfectly.

Last week another handler was throwing the Frisbee for Rio and he gave it too her so she could throw it again. The next time he dropped it on the ground, but as she went to pick it up, she saw him freeze. As she hesitated, I suggested she leave it and I took it from him. 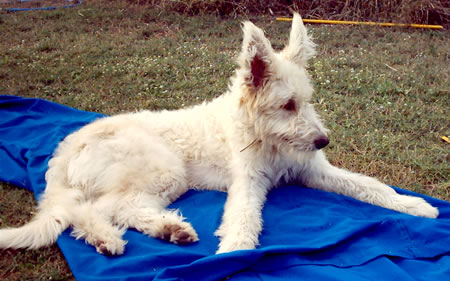 The other day Rio had stolen a dog meat can from the bin and he sat in the middle of the drive guarding it. I immediately got up and walked quickly and directly towards him. This time I did not speak in an angry tone. The previous time when I did angrily shout at him when he was about to urinate on my chair in the house, he dropped to the floor screaming as if I was about to kill him. This time in a normal tone, I just said, What are you up to now Rio, that is not yours? He just rolled over on his back in submission without any crying and I picked up the can without a problem.

Rio is not an angry aggressive dog but he is still giving a warning and his puppy teeth can still draw blood. The normal language is when another dog is about to steal their food the dog will freeze, followed by curling of the lips to bare the teeth then growling, then lunging and finally if that does not work, actual nipping. If both dogs are similar in hierarchy ranking, it can lead to a real fight to determine who owns the food.

Rio is a very submissive dog so he must never have been high in the hierarchy though he may still have told his subservient siblings to keep away from his food.

Moving into a human household, he would then do the same to humans if he felt they too were going to steal his food. Owners must show they can do this, but not permanently. After a few seconds, they must return it so Rio learns humans do not act like dogs.

Many owners, who own more than two or more dogs, will often see one of them chase the other away from their meal. Yet the dog will let the owner take it away without reaction. This is what we have to teach to all our dogs.

The problem comes when we are least expecting it. Suddenly seeing a dog curling its lips in an impression of Alien, followed by growling and finally biting creates anxiety. Rio thinks simply, so he is only trying to protect what he believes is his in the only genetic language he knows. Humans think more complexly, seeing all manner of problems from remembering all the horrendous stories they have read previously about dangerous dogs. Dogs cannot think like that, but as humans see all these problems unfolding before them, this takes precious moments that the dog sees as hesitation and therefore submission. The dog learns from this that humans are then subordinate to them. Once the human anxiety begins then further attempts that do not conceal this are doomed to failure. 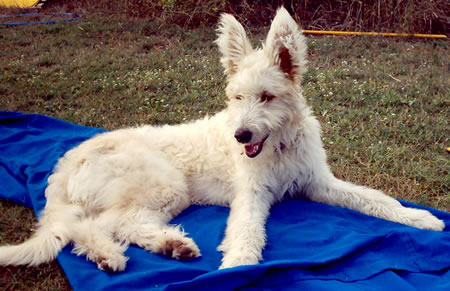 This week I left Rios bone test removal to last. I had intended to use the rather long-winded approach of teaching the command LEAVE using a lateral thinking technique. Because of Rios progress with all the other methods I was using, I felt this method unnecessary.

The actual method I was going to use is quite simple and the dog does not blame the owner because it does not see the owner at fault.

Whichever people once believed that the sun travelled round the earth or the earth travelled round the sun, the sun always rose in the east and set in the west. If applied to a dog seeing the remains of a hamburger in the street as you are walking along you pull it away from the said delicacy. The dog only sees the food move away and does not attack you as a result. A child on the other hand, walking past the sweet or candy stall if pulled away from said confectionary will immediately scream and cry in front of the parent, as they know they deprived them of what they wanted. Dogs cannot think like children,

Using this method, I would have tied his bone to a rope and tie the rope to the fence. Whilst on the lead Rio would pick up the bone and when I said LEAVE pull him away so the fence pulls the bone out of his mouth; but not seemingly by me.

A further stage is similar but, instead of a lead, I use another rope attached to the collar and going round an opposite pole. I am then standing in front of Rio so when I pull my left hand, Rio would move to my left and the bone fastened to the right pole, would come out of his mouth again.

Taking this a stage further, I could hold the still fastened bone in my right hand. As I pull Rio with my left hand, he can then associate the command LEAVE with loosing the bone whilst I hold it.

As Rio was responding well to my other methods of retraining, including bodily contact with lots of fussing him, I simply gave him his bone when he was in the class whilst he lay down by the fence. After ten minutes, I put on my protective glove, walked over to him and took the bone away saying LEAVE. There was no growling, no lip curling, nothing at all because the bone had gone. I then looked at him and gave it him back saying he was a good boy.

I was again utilising the quote of Tuco in the film The Good, the Bad, and the Ugly, If you have to shoot, shoot dont talk. Copying from this I did not hesitate, the removal was immediate, I had no anxiety because of the glove so there was no reaction from Rio, and I only removed it for a moment.

These are the most important elements of testing and retraining both Rio and his owners need to learn and the possessiveness will disappear, as this will for all of us, if we understand why it happens.