The move from Spain to France with Rio,

The removals men arrived from the UK with a HUGE lorry and trailer, much to Rios utter fascination. He had to inspect each man as he entered the driveway, sniffing them embarrassingly in certain places - the human equivalent of a handshake, I expect. We were asked all the usual questions that we get asked everywhere we go, whether its in Spain or France. What breed is he? How old is he? Is he going to grow any more? How big do you think he will grow? Where can I get one like that? Passing cars even stop on roundabouts for drivers to wind down the window and ask us about the dog. If we want to do shopping we dont take Rio with us as it takes too long, getting stopped every few minutes. Its lovely to show him off if we have the time though, especially if hes had a wash and blow-dry. You may remember from Alans pages that Rio was found abandoned in a river while we were living in Spain - hence the name. Our neighbours heard a little whimpering, squeaking sort of cry when they were walking home from the golf course. Following the noise they found a little puppy trapped down a 4 feet deep dry (thankfully) riverbed, wrapped him in a blanket and brought him home. That evening we knocked next door and helped speak Spanish on the telephone call to the dog rescue centre. Well have him until they arrive to collect him I said.and he cuddled right into my armshe likes you! they all saidand of course, that was that, and we kept him. Most people advised us he was an itsy bitsy - a mixture of breeds. Some said he was a Labrador mix. That would be nice, I thought, theyre nice and easy dogs, having never had a dog before. Then one day whilst browsing the internet I typed in the Spanish word for sheepdog - pastor - and up popped a picture just like Rio. They grow to 30 kilos, it said, they are working animals, it said, not usually in the home.hmmm, now we realised why he only liked sleeping outside on the terrace. Now we understood why he enjoyed nipping the backs of our legs .perhaps he thought we were his sheep. He was a tough little cookie so we had better train him or hell be such a (big) nuisance. 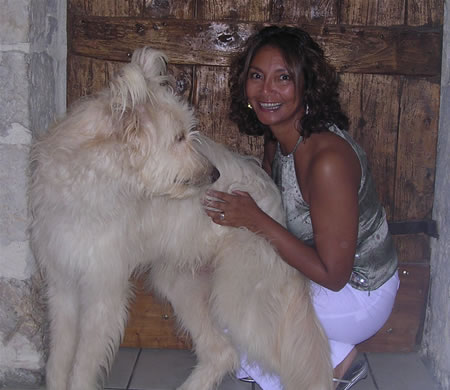 Anyway, back to the move, it all went swimmingly, literally, the rain didnt stop all day and Rio looked like a drowned rat as he helped the men put our stuff into the house, running into each room right before them so they had to manoeuvre carefully round him with large pieces of furniture, trying not to tread on his rather large lion-like paws. Get swiped with one of those and I guarantee youll bruise.

Moving was never going to be easy.BAD NEWS: Loads of our stuff that was stored in the UK was delivered damaged, smashed or dirty so theres a big insurance claim ahead. I had dreadful food poisoning from what we think were some prawns at a buffet meal. The nip on my arm from Rio has gone green so Im on anti-biotics and bandaged up. GOOD NEWS: Phils OK!!

A few days later I found a tick on Rios neck. There seem to be a lot of these here in France. We live near a sheep farm so I dont know if thats the reason. I got hold of the tick tweezers and got it out then disinfected the spot. A few days later Rio stopped eating or even drinking water. He just kept sleeping and was listless. This went on all over the weekend, and by Sunday evening I wondered if we would actually lose him. When Monday morning came I took him to the vets as by this time we felt sure it must be something terrible. I was told in no uncertain terms that I should not have waited until the Monday - the clue had been in the colour of Rios urine. It was brownish and apparently a sign of the infection he was tested for and could have been fatal. He was given jabs and put on medicine, me being told to put it into his food - but hes not eating I said Oh well, Ill think of something. It was a liquid medicine and we thought that pouring it down his throat would at least ensure it got into his tummy. Poor Rio - his eyes looking sadly up at us as we were almost choking him to deathThe next time I put it into some ice cream, he licked it from a spoon, it worked and at last he started to improve. I wondered whether that was the reason he nipped me before - did I touch the painful area or was he reverting to old guarding behaviour because of moving home?

Having said all that, its absolutely wonderful here in South West France. The weather's been sunny most days and about a very pleasant 30 degrees ...sunbathing on the terrace...aperitif before dinner on the terrace, wine with dinner on the terrace...more sunbathing on the terrace.... The views are amazing - as there's no light pollution we go outside at night with binoculars to look at the moon and thousands of stars. The garden is looking absolutely lovely - the Wisteria is out, as are the Lilacs, and we are surrounded by wild red poppies, both in the garden and now in the fields surrounding the house. It is wonderful watching Rio galloping across the grass or burying his head down a hole as if hes smelled something tasty. If hes caught digging in the garden, as soon as one of us walks over to stop him he lies down as if to say: Im just lying here minding my own business, not doing anything I shouldnt be with his great paws covering over the hole so we cant see it. I wasnt born yesterday.

We popped in to see our next door neighbours the other day. They speak no English at all, so our French has rapidly improved; its the best way to learn. Rio loves to see his friend Oggar the Rotweiler there, so he's happy while we chat over a coffee. Oggar is about 9 years old, a little unwell, and very gentle and well behaved. Rio gets jealous if I pet Oggar so shows him his teeth and tries to stand between us. Its all show, though - if Oggar reacted, Rio would jump a mile away with fright. He jumped out of his skin the other evening on one of our walks when a rather large green snake suddenly reared up towards him. Rio jumped about six feet into the air and landed heavily on my foot so I had to limp all the way home. Still, I got my own back. I trod on Rio during the night when I thought he was the bedside rug.